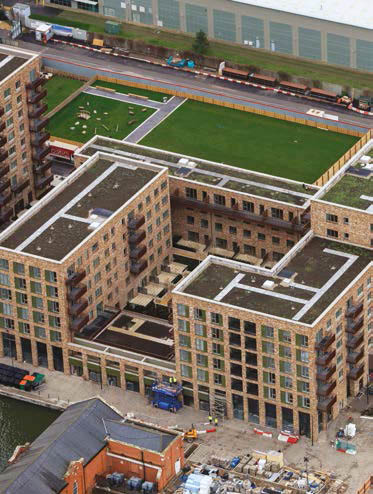 Back in 2000 the roofing industry got behind the emerging demand for green roofing, which was being significantly lead by the London Borough Planning Offices, the Mayor’s ‘London Plan’ and organisations such as livingroofs.org.

Whilst there are many positive drivers behind the reasons for using green roofs the main drivers could be seen as incident rainfall control, air pollution and biodiversity. Fast forward through the evolution of Green Roofs, and so called ‘Brown’ Roofs (un-planted roofs left to nature), the roofing industry are now investing in the development of Blue Roofs.

Blue Roofs are a method of providing a Sustainable Drainage System (Suds) at roof level. They provide attenuation of rainfall at a far higher level than the Green Roof that is typically installed over the Blue Roof.

Consisting of a water storage medium, typically a cellular geocomposite drainage/retention board, and a discharge control mechanism, Blue roofs attenuate rainwater rather than drain it as quickly as possible. Correctly designing the Blue Roof releases attenuated water at the required discharge rate of site, providing the integral source control and attenuation required by a SuDS system without the requirement for land consuming ponds and retention basins or below ground geocellular storage tanks. Blue Roofs can also be used in conjunction with these more traditional water control methods.

Incorporated in an inverted roof construction the Blue Roof elements are installed above the insulation and thermal sheet, and can be finished with a green roof (extensive, wildflower, biodiverse or intensive), paving or gravel ballast. Waterproofing materials such as Radmat’s PermaQuik PQ6100 Hot Melt Monolithic Waterproofing are BBA Certified for zero falls applications with a durability for the lifetime of the building, and are ideal for Blue Roof applications where security against water ingress is a priority. 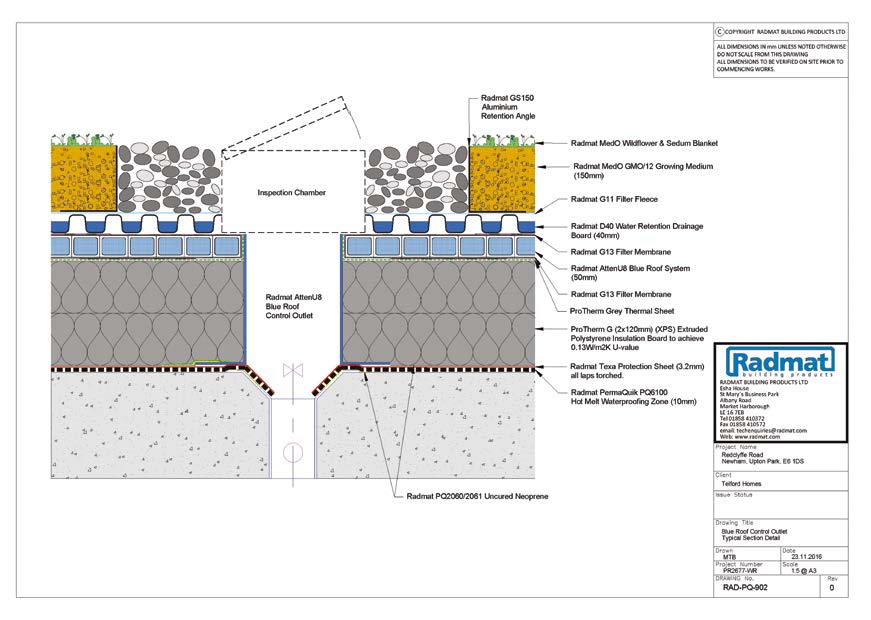 Jonathan Ward, an associate director at Arup simply describes a Blue Roof as ‘a flat roof allows stormwater to be temporarily stored and drain away slowly over a few hours, thereby reducing flood risks.’  What’s more the roof area doesn’t have to be significant; a roof of less than 300m2 can attenuate 94% of the rainfall volume of a 1 in 100 year 6 hour storm event, draining over a 27 hour period.

Blue Roofs are not a new idea. They have been around in one form or another for well over 60 years, in the UK, Europe and the USA. They can be used for attenuation, storage, grey water harvesting or a combination thereof. They can go even further, like the University of Toronto’s Innovation Complex, which has a zero-runoff roof that incorporates a green roof, wind turbines and solar PV.

So why aren’t we building more blue roofs in the UK? The answer to that probably lies in scepticism, outdated concerns over flat roofing materials and a lack of guidance documents and legislation.

To breach these boundaries a pan industry working group has been established by the National Federation of Roofing Contractors Joint Flat Roofing Technical Committee. Consisting of the NHBC, BBA and representative of a number of waterproofing trade bodies, waterproofing manufacturers and drainage manufacturers the committee intends to tackle the issues of certification and Codes of Best Practice.  With these instruments in hand the committee will move on to pressing government and the EA to look more closely at the positive contributions to flood risk management that Blue roofs can have, to both New Construction and existing buildings.

If you would like more information about any of the products and systems mentioned, please contact techenquiries@radmat.com